Washington, DC: Medical experts have long known that the side effect associated with the class of antidepressants known as the selective serotonin reuptake inhibitors most likely to drive people to suicide or violence against others is "akathisia".

Akathisia is but one in a long list of side effects that SSRI makers were able to keep hidden, as they settled thousands of lawsuits out of court, by obtaining court orders to seal documents produced in litigation. For instance, a 1984 Eli Lilly document showed akathisia occurred in at least 1% of patients long before Prozac was approved. 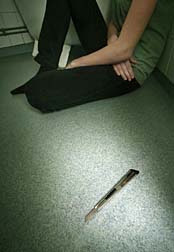 In a paper entitled, "Suicides and Homicides in Patients Taking Paxil, Prozac, and Zoloft: Why They Keep Happening - And Why They Will Continue," Dr Jay Cohen points out that, as soon SSRI's arrived on the market in the late 1980s, reports of sudden, unexpected suicides and homicides by patients taking the drugs began to come in.

The DSM-IV acknowledges the association of akathisia with suicidality and states: "Akathisia may be associated with dysphoria, irritability, aggression, or suicide attempts."

According to Dr Cohen, SSRI's can create a combination of side effects that reduce impulse control and cause severe agitation or restlessness that may become intolerable. He says, impulsive behavior coupled with impaired cognitive functioning can be dangerous.

A 1998 article on akathisia associated with Prozac and its link to suicidal ideation in the Journal of Psychopharmacology, by Roger Lane, who was working for Pfizer at the time, states in part:

"It may be less of a question of patients experiencing fluoxetine-induced suicidal ideation than patients feeling that 'death is a welcome result' when the acutely discomforting symptoms of akathisia are experienced on top of already distressing disorders.

Dr Joseph Glenmullen, author of "Prozac Backlash" and "The Antidepressant Solution," obtained a Lilly document dated November 13, 1990, from Claude Bouchy, a Lilly employee in Germany, to three executives at Lilly's Indianapolis headquarters, complaining about directions to change the identification of events as they are reported to doctors from "suicide attempt" to "overdose" and "suicidal ideation" to "depression".

"I do not think I could explain to the BGA, to a judge, to a reporter or even to my family," Mr Bouchy wrote, "why we would do this especially on the sensitive issue of suicide and suicide ideation."

Dr Glenmullen says akathisia makes people profoundly agitated, uncomfortable in their own skin and impulsive. It erodes judgment and can lower their threshold to become violent toward themselves or others, he states.

Dr Martin Teicher, an associate professor at Harvard Medical School and McLean Hospital researcher at the time, co-authored a paper with psychiatrist and psychopharmacologist Jonathan Cole on the link between Prozac and suicide back in 1990, which found that 3.5% of patients on Prozac either attempted or committed suicide due to severe agitation from akathisia.

In the paper, the authors discussed 6 cases of patients who became intensely preoccupied with suicide after taking Prozac. Dr Cole said, in an affidavit submitted in litigation on April 20, 2000, "Our purpose in writing this article was to alert the profession to an alarming, probable drug side effect which we had observed."

"There was a very clear association," he said, "not merely temporal, between the ingestion of Prozac and the patients' suicidality."

"I have also seen patients and reviewed cases," Dr Cole stated, "where an SSRI unmistakably precipitated a driven preoccupation with suicide."

"The SSRI drugs, as a class," he advised, "clearly have the potential to cause, and in reasonable medical probability or certainty do cause, akathisia in some patients."

"Although in 1997," Dr Cole notes, "practicing physicians undoubtedly varied in their level of sophistication and knowledge about the phenomenon, the potential to cause akathisia and its potential, in turn, to trigger suicidal behavior."

Additional evidence showing Lilly knew about the akathisia-induced suicide surfaced in an application for a patent for a second-generation Prozac pill which claimed that the new-and-improved Prozac would decrease the side effects of, "inner restlessness (akathisia), suicidal thoughts and self-mutilation."

Besides the concealment of this adverse effect by the drug companies, another major problem in getting the word out, according to Vince Boehm, who tracks all studies and research published on SSRI's, is that the FDA refuses to fully acknowledge the role of drug-induced akathisia in what he refers to as "this hideous equation."

"Akathisia is up to 6 times more likely to trigger a suicide," he states, "than any form of depression caused by life's circumstances alone."

"The minds inner turmoil is so intense that a person will do anything to escape it," he says.

"The Brits, the Aussies, Canada, and the European Union," he points out, "have all gone on record recognizing this phenomenon for all age groups."

Judging by internal FDA documents which have surfaced in litigation, Mr Boehm appears to be correct. For instance, in a September 11, 1990, memo, FDA scientist Dr David Graham found that Lilly's data on Prozac was insufficient to prove the drug was safe, stating: "Because of apparent large-scale underreporting, the firm's analysis cannot be considered as proving that fluoxetine and violent behavior are unrelated."

A more recent study in the September 2006 journal Public Library of Science (PLoS) has further verified the warnings made by many other experts, when it reported that, in addition to self-harm, SSRI's cause some patients to become violent and homicidal.

Dr David Healy, described as "one of the three most eminent academic clinical psychiatrists in the UK," professor David Menkes, from Cardiff University in Britain, and Andrew Herxheimer, from the Cochrane Centre, did the study to determine the risk of violent behavior in people taking SSRI's.

As part of their investigation, the researchers reviewed all available clinical data on SSRI's and summarized a series of "medico-legal" court cases involving patients who had became violent on SSRI's.

One case discussed dated back to 2001, when Dr Healy testified at a wrongful death trial in Wyoming, after a 60-year-old man on Paxil shot and killed his wife, daughter and infant granddaughter before turning the gun on himself in 1998.

At trial, the jury returned a verdict for the man's son-in-law after Dr Healy presented the jury with a summary of an unpublished company study that found incidents of serious aggression in 80 patients on Paxil, including 25 that involved homicide, and proved that the drug maker knew about the violence and suicide risks before the 1998 shootings.

Dr Healy points out a rechallenge study by Rothschild and Locke in McLean Hospital where the authors found Prozac-induced emergent suicidality associated with akathisia in several patients. In order to test whether suicidality was coincidental or associated with Prozac, they withdrew Prozac, then re-administered it, and in all three cases, the patients experienced the exact same effect. "All three patients developed severe akathisia during treatment with fluoxetine and stated that the development of the akathisia made them feel suicidal and that it had precipitated their prior suicide attempts."

However, even more alarming, one set of patients who became suicidal on Prozac were described as follows: "[n]one had a history of significant suicidal behavior; all described their distress as an intense and novel somatic-emotional state; all reported an urge to pace that paralleled the intensity of the distress; all experienced suicidal thoughts at the peak of their restless agitation; and all experienced a remission of their agitation, restlessness, pacing urge, and suicidality after the fluoxetine was discontinued."

Akathisia, or acathisia, is a syndrome characterized by unpleasant sensations of inner restlessness that manifests itself with an inability to sit still or remain motionless (hence the word's origin in Ancient Greek: from καθίζειν - kathízein - "to sit" with a privative a as prefix expressing negation or absence; literally meaning inability to sit). It can be a side effect of medications, or it can, to a lesser extent, be caused by Parkinson's disease and related syndromes,[1] and likely other neurological diseases. However, this may be due more to the drugs used in treatment such as sinemet (l-dopa) and less with the Parkinson's disease itself.[2] Another major cause is withdrawal from almost any physical addiction, for example, in benzodiazepine withdrawal syndrome.[3] It was discovered that akathisia involves increased levels of the neurotransmitter norepinephrine, which is associated with mechanisms that regulate aggression, alertness, and arousal.[4] Though no further research has been done as of yet, it may also be involved with disrupted NMDA channels in the brain, which have both synergistic and regulatory effects on norepinephrine.

Akathisia may range in intensity from a sense of disquiet or anxiety, to severe discomfort, particularly in the knees. Patients typically pace for hours because the pressure on the knees reduces the discomfort somewhat; once their knees and legs become fatigued and they are unable to continue pacing, they sit or lie down, although this does not relieve the akathisia. At high doses or with potent drugs such as haloperidol (Haldol) or chlorpromazine (Thorazine/Largactil), the feeling can last all day from awakening to sleep. The anticholinergic procyclidine reduces neuroleptic-induced akathisia to a certain degree, in addition to preventing and sometimes eliminating the muscle stiffness that can occur alongside akathisia.

Some doctors report an anti-anxiety drug such as clonazepam helps to reduce the anxiety which occurs along with the akathisia.[citation needed]. When misdiagnosis occurs in antipsychotic neuroleptic-induced akathisia, more antipsychotic neuroleptics may be prescribed, potentially worsening the symptoms.[1] High-functioning patients have described the feeling as a sense of inner tension and torment or chemical torture. Many patients describe symptoms of neuropathic pain akin to fibromyalgia and restless legs syndrome.[5] Although these side effects disappear quickly and remarkably when the medication is stopped, tardive, or late-persisting akathisia may go on long after the offending drug is discontinued, sometimes for a period of years—unlike the related tardive dyskinesia, which can be permanent. Considering that this is rare, it must also be noted that it is not unheard of that patients are medicated or given higher doses without their knowledge.

Akathisia is most often seen as a side effect of antipsychotic medications, but has other causes as well:
The 2006 UK study by Healy, Herxheimer, and Menkes observed that akathisia is often miscoded in antidepressant clinical trials as "agitation, emotional lability, and hyperkinesis (overactivity)".[11] The study further points out that misdiagnosis of akathisia as simple motor restlessness occurs, but that this is more properly classed as dyskinesia. Healy, et al., further show links between antidepressant-induced akathisia and violence, including suicide, as akathisia can "exacerbate psychopathology." The study goes on to state that there is extensive clinical evidence correlating akathisia with SSRI use, showing that approximately ten times as many patients on SSRIs as those on placebos showed symptoms severe enough to drop out of a trial (5.0% compared to 0.5%).

Source and FULL Article at:  Wikipedia


Posted by Advanced Scientific Health Information and News at 9:07 PM

Anny had a plan to turn the little old log cabin on the corner of the Herb Farm into a gift shop and 'barter' mart for our neighbors and friends one day. This is not quite what she imagined but this will do for now. We will be adding new features, resources and products soon. Stay tuned!

For the nature in all of us.
Find Safe & Healthy

Food In YOUR Area

Where To Find
REAL MILK

SICK? NEED HELP?
Know Someone Who Is or Does?

Let Peace
BE the Journey

Next Time You Look Up

BLUEPRINT FOR FREEDOM -
with Raymon Grace